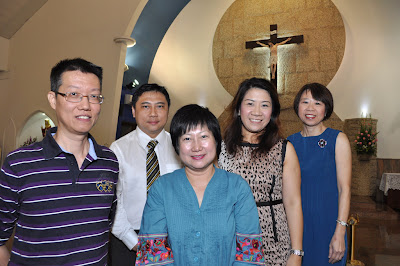 The year 2013 began for us with the commissioning of five new principals on the 26th of January at St Anne's church.
Our next major event will see Dr Michael Downey arrive on the 8th of April to deliver training sessions for Chaplaincy Teams.
Later in the year the Education Conference will take place on the 13th and 14th of September.
For the Catholic church in Singapore we will see the Episcopal Ordination of Msgr Willian Goh, on the 22nd of February who will later succeed His Grace Archbishop Nicholas Chia.
Following the resignation of His Holiness Pope Benedict XVI on the 28th of February, we will hopefully see a new leader of the Catholic Church, by Easter
Posted by ACCS at 11:30 AM No comments: 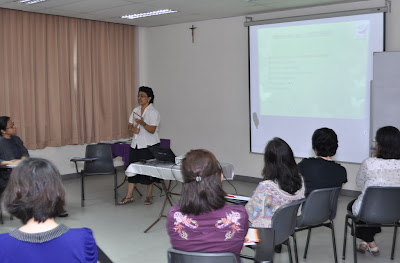 A meeting for Religious Education, RE, Coordinators was held today, the 6th of November at CAEC in Highland Road.
Fifteen teachers gathered for a sharing on their past year's work with their students and were updated on the Year of Faith and how they could share it with students.
They were also given an update on the CMECS programme and its implementation.
Ms Wendy Louis, executive director of ACCS, (in the picture) and Ms Jeanette Atabelo facilitated the discussions.
Posted by ACCS at 3:58 PM No comments:

Teachers' Day this year was celebrated at Catholic Junior College on the 15th of September.
Archbishop Nicholas Chia along with Fr Michael D'Cruz and Fr Colin Tan celebrated the mass which was attened by some 400 people.
20 children from the Canossia School for the hearing impaired provided two beautiful hymns during the Mass.
His Grace was keen to link the theme of the celebration “Follow Me, Walk in the Presence of the Lord” with the call of the Holy Father to celebrate the Year of Faith. In his homily he invited all present to join him in celebrating the opening of the year of faith next month.
He emphasised that the year of faith is an opportunity to “walk in his presence in every moment of every day.” He explained that we could do this through more attention to prayer and added, “In this Year of Faith when we also celebrate the 20th anniversary of the publishing of the Catechism of the Catholic Church, we can open our eyes and our ears to hear God speaking through the teachings of the Church… Try to make time to study and read together some sections of this important document.”
Posted by ACCS at 4:00 PM No comments:

On the 26th of July 2012 a meeting was held for Catholic Principals and vice Principals at CAEC in Highland Road.
Three major topics were discussed:
1. Those present were given copies of the three booklets published by ACCS on Catholic Education in Singapore. The topics of the booklets were: a)Guidelines for Nurturing the Catholic Identity of Catholic Schools, b)Core Values, Common Purpose & Goals and c)Catholic Identity & Ethos of Catholic Schools
2. The office of the Archdiocese run Professional Standards Office
3. Report on Civics & Moral Education/Character Education in Catholic Secondary Schools.
The participants were briefed by the Chairman of ACCS, Prof. Tan Chen Han and ACCS executive director, Ms Wendy Louis.
Addendum - On the 3rd of August, another batch of Principals and Vice Principals attended an identical meeting at CAEC.
Posted by ACCS at 6:05 PM No comments:

Over two days, the 23rd and 24th, Chaplaincy Team members received further training at CAEC.
On the first day, Michelle Soliano, Program Manager from the Family Life Society spoke to the group on "Working with Schools" - Today's Youth Culture. After a break Ms Soh Lai Leng, principal of Holy Innocents High spoke on the "Educational Context Today - Learning Environment".
On the second day, Bro. Collin Wee spoke on the Family Life Spiral, the four critical training points of childhood and the Seven possible Effects of the Broken Home on the Child. Ms Merilyn Dasson from ACCS rounded up the session with a talk on the Needs of the Very Young.
Ms Wendy Louis concluded the day's training with a summary, a scriptural reflection and closing prayer.
Posted by ACCS at 5:15 PM No comments:

We assist Singapore Catholic Schools in developing whole persons for God in society.
This blog provides information and ideas to enrich your ministry of leading, teaching and accompanying students. We hope these posts will inspire and enrich you as an educator who forms students to become whole persons, committed believers and responsible citizens.
Browse our web site www.accs.sg for even more information

Schools of the Brothers of St Gabriel

Schools of the Canossian Sisters

A School of the Franciscan Missionaries of Mary

A School of the Good Shepherd Sisters

Schools of the Infant Jesus Sisters

A School of the Marist Brothers